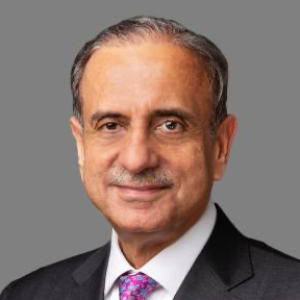 Asad Ahmed is a Managing Director with Alvarez & Marsal in Dubai, with more than 30 years of experience in banking, credit management and in formulating and managing strategic and operational changes in financial institutions.
He brings in-depth knowledge of strategy formulation and implementation, performance improvement initiatives and change management programs. He has held various senior management positions in the Middle East, Africa and Canada.

At A&M, Mr. Ahmed has led assignments ranging from review of operational risk at a major Gulf bank to corporate debtor advisory. He has also served as Interim General Manager with one of the largest brokerage firms in the UAE.

Before joining A&M, he worked as a managing director with Gulf African Bank (Kenya), the largest Sharia compliant bank in East Africa. During his tenure, the bank saw a 154 percent increase in YOY profitability, successful implementation of a three-year strategy and major advances in the risk and compliance environment.

A performance driven culture, along with ESOP and options, was introduced. Mr. Ahmed spearheaded the effort which led to the International Finance Corporation taking 15 percent equity in the bank. For the massive turnaround at the bank, and for focusing on bringing the vulnerable into financial inclusion, Mr. Ahmed was awarded the Order of the Grand Warrior (OGW) by the President of Kenya.

Previously he was at National Bank of Fujairah, last serving as General Manager. He oversaw bank operations and was responsible for extending the service offerings, branch / ATM network, strengthening corporate governance (audit, compliance, KYC) and setting up the bank for Basel 2 Implementation. During his tenure, the bank achieved a 35 percent per-annum growth in net profits for four consecutive years.

Earlier, Mr. Ahmed worked for nine years with Canadian Imperial Bank of Commerce (Toronto), co-leading a team to successfully setup new lines of business and increase non-traditional lending to intellectual property based business. He also developed a mezzanine finance program and two other quasi-equity funds, and served on their credit committees.

In the past, he has served on the Governing Council of the Kenya Bankers Association, and the Board of Nairobi Hospice. He has been a frequent speaker at Islamic Finance conferences, and has taught at the Executive MBA program at the SP Jain Centre of Management, Dubai.